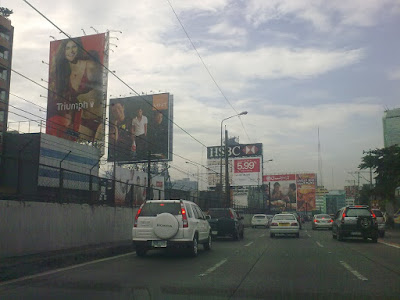 Metro Manila's main thoroughfare, EDSA, is strewn with images of sexy women in various states of undress. Bench, a Philippine icon in fashion brands, is the category leader in this respect, having shown images from their yearly underwear fashion show. They are seen everywhere advertising just about anything - scantily clad men and women larger than life on a roadside billboard. Other lingerie brands such as La Senza and Triumph have followed suit. The question remains if seeing these images while driving distracts motorists enough to create adverse effects?

There is no conclusive evidence in the Philippines to show that male drivers are distracted in their driving because of these sexy billboards. In the United Kingdom, close to a quarter of British motorists have admitted that they have been so distracted by such billboards that they have dangerously veered from their lane. In a recent research, one in five men have said that they have diverted their eyes to look at scantily clad women on a billboard. However, only one in 10 women were affected by the sight of a scantily clad man on a billboard.

A similar research will soon be conducted by the Philippine Center for Out-Of-Home Media Research and Science (PhilCOuRSe) to validate if the same findings hold true across the seas.