Home » DPWH » Industry News » It is so easy to put the blame on someone else...

It is so easy to put the blame on someone else... 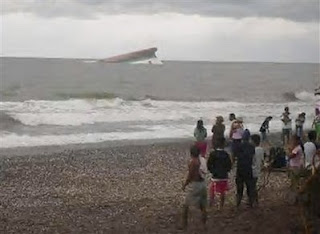 I cannot help but be appalled at the reaction of shipping firm Sulpicio Lines Inc. concerning the tragedy of the ill-fated vessel, M/V Princess of the Stars. The latest news is that Sulpicio Lines is pinning the blame on the government's weather agency, PAGASA, for not coming up with an accurate weather report and thus they had allowed the vessel to sail.

As early as Friday, June 20, my operations people in Cebu had already advised me that they would roll down the billboards in the area because of the strong gusts already buffeting the area. Typhoon Frank was coming in from the East and headed Northwest to Manila in an upward motion which was the exact opposite of the M/V Princess of the Stars' voyage path to Cebu.

In simple terms, the M/V Princess of the Stars was really sailing into death's chambers.

People in the outdoor advertising business are not meteorologists. However, we have enough common sense though to feel the strong gusts of wind and can sense when danger approaches. So we roll down the billboards. Moreover, having learned a bitter lesson from Typhoon Milenyo in 2006, we have relied on multiple websites which show satellite pictures of the oncoming storm. As such, if PAGASA was wrong as Sulpicio alleges, couldn't the ship's owners have counterchecked with the U.S. Navy's Weather Satellite feeds? These are all online on the World Wide Web and surprisingly, simple folk as billboard operators know how to check this website. ( click : http://www.nrlmry.navy.mil/TC.html ). Then there's the Japanese Weather Satellite, etc. etc. etc.

Now in the wake of more than 800 lives lost at sea, I ask, "Where are the folk who have vehemently accused the outdoor advertising industry of endangering life and property because of the growing number of billboards in the metropolis?".

It is clear. The maritime industry has endangered more lives, property, and..the environment, than the outdoor advertising industry. And so it goes... it is so easy to put the blame on someone else.

Now I ask, where is my favorite Senator Miriam Santiago, the author of the Anti-Billboard Blight bill? I sincerely hope she would elevate this oft recurring matter of maritime mishaps to the level of a Senate inquiry in what we've always heard - "in the aid of legislation". Or have we become too desensitized that we feel that the levels of Transportation Undersecretary Lhen Bautista can just take care of it?

Where is our respected opinion columnist, Randy David and the Anti-Billboard Coalition? I respect the latter's effort in stimulating regulation in the billboard industry but, can we come up with a coalition too which spurns the recklessness of maritime operators who court disaster by sailing right into a storm?

Just before we start ranting about the billboards, let us make this clear - from the aftermath of Typhoon Milenyo, numerous steps have been taken to regulate outdoor advertising. Implementing rules and guidelines are now in place at various levels spanning the lowly barangay way up to the Department of Public Works and Highways. An Administrative Order has also been enacted by the President GMA.

To my colleagues in the industry, whenever somebody starts talking ill about Out-Of-Home media in general, here's a line which you may always want to have in your pocket : "It's so easy to put the blame on someone else....but did you know that more people have been killed by the maritime industry than the billboard industry?"

So now I await Senator Miriam Santiago's next privilege speech.