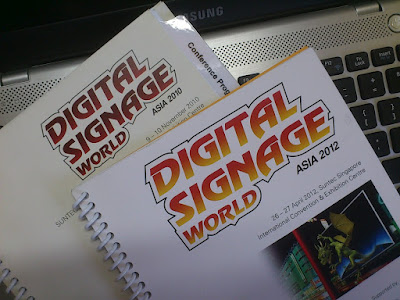 Digital Signage World Asia is the leading conference in the region for Digital Signage, Digital Out-Of-Home Media, and Digital Place-Based Media. Two conferences have been concluded. The first was in November 9 and 10, 2010, and the most recent one was held a few days ago, April 26 and 27, 2012.

I served as Conference Chairman in the first DSWA in 2010, apart from speaking and panel moderation duties. In the recent, Digital Signage World Asia 2012, I spoke on "Driving digital signage excellence in Asia with new interactive media and content" and moderated the panel discussion on

with Bing Kimpo and Nick Gale of POPAI.