2010 : The Year of Lousy Billboard Creatives 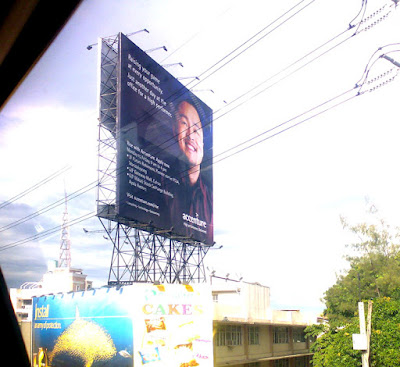 With the proliferation of sexy billboards on EDSA, we have seen how advertisers and their design agencies violate the morals of the more conservative commuting public. What visuals are not supposed to be posted openly are now seen in great number. Nevertheless this violation seems to be a very petty sin in comparison to what I'm about to bring up.

We're talking about the rules in creating a great billboard layout. It is always said that a good billboard layout can be as equally effective when used in print. But a good print ad may flounder when posted on a billboard. My post for today demonstrates the horror of violating the basic rules of billboard design. To wit, BE BRIEF, BE BOLD, BE CLEAR.

This consulting company's latest billboard displays how money can be thrown away with a lousy layout. Strike three on all counts. Sad to say, and I'm sure you'd agree with me, either client or agency needs a consultant on the proper use of the medium.

Let's go back to the basics - Billboard advertisements are designed to catch a person's attention and create a memorable impression very quickly, leaving the reader thinking about the advertisement after they have driven past it. They have to be readable in a very short time because they are usually read while being passed at high speeds. Thus there are usually only a few words, in large print, and a humorous or arresting image in brilliant color.

If 2006 went down as a year of infamy due to Typhoon Milenyo, allow me to say this, 2010 should be known in the OOH industry as The Year of Lousy Creatives.